Our book is available now!

Highlights from the Glass Collection of the Rijksmuseum

The Rijksmuseum, the Dutch national museum dedicated to arts and history, holds many of the nation’s treasures. It is internationally renowned for its collection of 17th century paintings by VERMEER, STEEN, and of course REMBRANDT. But the Rijksmuseum also has a very rich glass collection, with more than 1500 glass objects dating from the Middle Ages through well into the 20th century. These pieces are not situated in a separate glass department, but are on display throughout the museum, integrated with other pieces of decorative art, fine art and historical artefacts.

In this essay I will discuss a few highlights from the glass collection of the Rijksmuseum. I will focus on two periods in Dutch glass: diamond-point engraved calligraphy glass from the 17th century and stipple engraved 18th century glass. Needless to say, the glass collection of the Rijksmuseum holds so much more; from the mysterious Hedwig beaker to Orient inspired Art Nouveau vases, and from the elegant façon de Venise goblets to modern Leerdam Unica.

Figure 1: Roemer with a poem to Constantijn HUYGENS Diamond-point engraving: Anna ROEMERS VISSCHER 1619 Purchased with the support of the Rijksmuseum-Stichting

Anna ROEMERS VISSCHER (1583-1651) and her younger sister Maria Tesselschade (15941649) were both very talented glass engravers. They were pioneers in the field of calligraphy glass, objects engraved with texts in stylish lettering. Their work was not done professionally, that is to say, they did not make money creating and selling their engraved work. The sisters were educated in the arts, such as music, painting and embroidery. As ladies from the higher social class, they considered glass engraving a refined pastime and gave their creations as presents to friends and acquaintances. Anna and Maria Tesselschade were part of a very interesting group of friends, the Muiderkring, a circle of literature and music lovers who met at Muiden Castle, the summer residence of the poet P.C. Hooft.

The sisters engraved their glasses with sayings in Latin, French, Italian or Dutch, in elegant curly letters and decorated them with flowers and insects. Unfortunately, not many glasses have survived. The Rijksmuseum holds five objects: three engraved glasses by Anna ROEMERS VISSCHER, two glasses engraved by Maria Tesselschade ROEMERS VISSCHER.

In 1619 Anna decorated a glass for the poet, art connoisseur and secretary to two Princes of Orange Constantijn HUYGENS (1596-1687) (figure 1). She engraved a poem on the glass, asking Constantijn for inspiration, since her pen has dried up:

“Withered is my pen, musty is my quire, Rusty is my mind and mouldy my lyre.

Of Helicon the Mount, get water for to drop

In my parched ink, so that I (as I was wont) now may

With normal pen to friends my greetings say.”

Anna and Constantijn were good friends. Constantijn supported Anna after the death of her mother and encouraged her to keep writing poetry. He wrote a poem praising Anna’s skills as a glass engraver. Anna was grateful for his support and thanked him with this engraved roemer. In the lines of the engraving Anna has added some ink, presumably to emphasize the line in the poem about the ink being dried up. 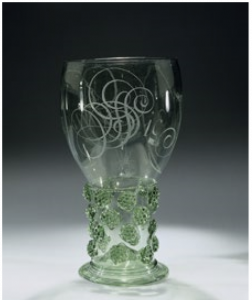 The Rijksmuseum holds an engraved roemer by Maria Tesselschade with the Latin inscription “Sic Soleo Amicos” (translation: “This is how I treat my friends”) (figure 2). With its 23 cm (11 cm bigger than Anna’s glass) this is an exceptionally large roemer. The lines that form the letter “S” elaborately curl round and round, mesmerizing the beholder. The tiny spider, hanging from the letter “S”, in pursuit of a fly, triggers a smile and puts our feet back on the ground. This roemer would be passed around a group of friends. Each person would take a drink from the same glass, thus sealing the bond of friendship. We should read “This is how I treat my friends” in this light.

Calligraphy was very popular in the Low Countries in the first decades of the 17th century. Several sample books, such as Spieghel der Schrijfkonste (Mirror of the Art of Handwriting) by Jan van den VELDE (1605) were published (figure 3). Calligraphers and glass engravers could use these sources for inspiration.

It was probably Anna who inspired another glass engraver, Willem Jacobszoon VAN HEEMSKERK (1613-1692). VAN HEEMSKERK was a Leiden based cloth merchant as well as a poet. At a later age he started engraving glass as a pastime and (like the VISSCHER sisters) donated his work to friends. With his diamond-point stylus VAN HEEMSKERK engraved goblets, bottles and dishes with proverbs or quotations from the Bible. The lines of his lettering are everywhere, in a balanced continuous flow. Notice the seemingly endless lines of the lettering on the rim of the dish that VAN HEEMSKERK engraved for his son’s wedding in 1685 (figure 4). The text refers to fidelity in marriage.

Anna ROEMERS VISSCHER was probably the first engraver to use the technique that Dutch glass engravers would become most remembered for: the stipple engraving. In an engraving dated 1646 on a berkemeyer, Anna engraved a fly, a violet, a butterfly and a cherry. The body of the cherry is built up of dots, while she did use a line for the contour of the cherry. It took more than 75 years before the stipple engraving would surface again. To make a stipple engraving, the engraver uses a diamond point and taps the glass to create tiny dots. Together, these dots (stippels) form an image. Dots wider from each other give a darker shade, while those placed closer to each other are lighter. This time-consuming technique was typically practiced in 18th century Holland, more specifically in Dordrecht and The Hague. 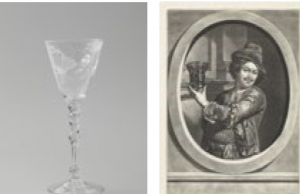 Collector, plantation-owner, writer and poet, Frans GREENWOOD (1680-1763) started making stipple engravings in 1722. He was the first in Holland to use this technique to create an entire image on glass. He worked from paintings and prints. For instance, for his engraving of a man holding a berkemeyer, GREENWOOD used a print made by Bloteling after a painting by VAN MIERIS(figures 5 & 6).

The stipple technique was often used for ceremonial goblets, glasses that were made for a special occasion, a celebration, such as a wedding, childbirth, or a business transaction. Friendship was a very popular theme (figure 7). With these glasses a toast would be made, and people would share a glass together.

But the technique was also used for a less harmonious subject. Stipple engraved glasses were used in the conflict between the Patriots and Orangists, a period of political instability in the Dutch Republic when the Patriots opposed the hereditary power of the Stadholder. The Orangists, supporters of the Stadholder, would have glasses engraved with members Stadholder’s family (figure 8). The Patriots would toast with a glass decorated with a portrait of their leader, such as burgomaster Henrik Hooft DANIELSZ (1716-1794) (figure 9).